Waiting for the guy with the keyboard

Have you ever been in a meeting, where most of the people in the room stare at the screen, watching somebody typing stuff into a document or a form? It’s painfully slow, the funny guy in the room makes fun of the typist, some of the attendants starts fiddling with their mobile phones, another starts doodling on a piece of paper. All the energy that was supposed to be in the room is gone, and you start to wonder why you even bother with these meetings – after all, it’s only the guy with the keyboard that is doing any work.

How did you end up in this room? That’s bound to be different for different teams, but typically it has to do with the backlog. You decide, somewhere along the way, that it is too much work to keep both a digital copy and an analogue version of the backlog – and since it seems easier to just use the digital copy, you skip post-its and whiteboards. The result: you end up waiting for the guy with the keyboard.

How do you fix this?

The first step is to realize is that you have a problem. This can sometimes be hard, as people might not see what is going on. If you are the scrum master – and often end up as the guy with the keyboard that the rest of the team is waiting for – then it might be tough to see how the meeting is perceived by the rest of team. After all, for you, the meeting is probably quite stressful, right? But if you see blank stares, people start fiddling with their phones or correcting your spelling mistakes, take a hint!

The second step is to realize what the problem actually is. Surprisingly, many teams do not see this. Instead, they start blaming the process, Scrum or meetings in general. As a scrum master, you might be tempted to give in. You start to get that it might be quite boring to watch somebody type, and you start to excuse some parts of the team that probably will not contribute anyway. Or, you start to have the meetings less frequently.

And suddenly, your decision to save work by using only a digital tool has influenced the heart of your process!

There is a very simple solution. Go back to post-its and whiteboards! By all means, use a digital backlog tool, but be prepared to spend some time to prepare before every meeting (to print index cards or similar, and to bring post-its and pens) and to do some typing after every meeting. But trust me, having an engaged team that collaborates instead of waiting for the guy with the keyboard, is certainly worth it! 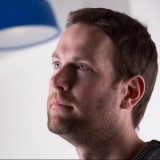